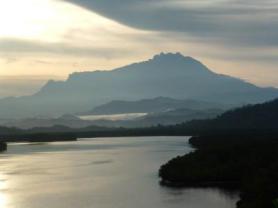 Why or what Kinabalu you may ask?  Well the Kinabalu cats registered prefix is named after this great mountain, Mount Kinabalu in Borneo in South East Asia.

My Father-in-law was the acting Governor of Borneo in the 1950's.  The British Government house in Borneo was situated at the foot of Mount Kinabalu and had views out over this lovely mountain.  My Father-in-law used to tell me about this time in Borneo and it was in his memory that I chose my official GCCF prefix Kinabalu.

I had seen some wonderful pictures of these mini black panthers and as ever thought I just had to have one.  As it had been a long held ambition to own my own Bombay cat.